As the generation that embraced the gap year start their own families, the trend of travelling during parental leave is taking off. END_OF_DOCUMENT_TOKEN_TO_BE_REPLACED

What is with all the DIY coffee, cocktails and desserts? Sarah Tayler delves into the newest foodie trend.

END_OF_DOCUMENT_TOKEN_TO_BE_REPLACED

These are the up-and-coming Australian tipples you need in your wine rack, writes Sarah Tayler.

END_OF_DOCUMENT_TOKEN_TO_BE_REPLACED

Tourist in my Town: Learning to Fly

In May’s edition of Tourist in my Town for Blank GC Magazine, Sarah Tayler explores the world of indoor skydiving.

END_OF_DOCUMENT_TOKEN_TO_BE_REPLACED

What’s not included in that all-inclusive luxury cruise

You’ve got a butler.  The fine dining’s covered. Sarah Loughlin explores the extra charges that can still crop up on an all-inclusive luxury cruise.

What do you give the cruiser who already has everything? That’s the dilemma of luxury cruise lines chasing a well-heeled client who just expects a butler, champagne on ice and a restaurant run by a celebrity chef.

All-inclusive has become the latest catchcry. But all-inclusive fares may still end up costing you more than you think.

15 Ways to Keep Fit on a Cruise Ship

On modern ships, getting your daily exercise doesn’t have to mean a stroll on the promenade deck. Whether you like early morning yoga sessions, sweating it out at spin class, or getting your adrenaline pumping on a surfboard, there is something to keep everyone fit and active.

Fancy a last minute getaway, an escape from the chilly winter months? Check out the 8 best winter cruises from Australia for 2017. Starting from just $54 a night, these deals are not to be missed.

Getting to know Saigon

Saigon is busy. The energy and the atmosphere of the city, especially the centre, is electric. Bustling with people, bikes and cars. No matter what time of day it is, there is always something going on.

Most tourists that visit Ho Chi Minh City, or Saigon as it is also known, spend their time in the tourist-centric heart of the city. District One comes complete with backpackers, hotels, bars, cafes, markets, and well-known sights such as the Post Office, Notre Dame Cathedral, and the Reunification Palace.

Unbeknown to the majority of people travelling through, Saigon is actually made up of 24 districts, each with their own function and personality. To find out more I joined the XO Tours team for their Saigon by Night motorbike tour. XO Tours is a locally run Vietnamese company whose motorbike drivers are exclusively women. As a female travelling alone this was an attractive part of the offering.

I was met at my hostel in District One by Tam, my driver for the evening. XO drivers are easily spotted because they wear blue and white traditional Vietnamese Ao Dai with white XO Tours helmets.

Not a motorbike owner myself, when I first arrived in the city the thought of taking a bike taxi was not that appealing. At first glance, the traffic is intimidating with hundreds of bikes weaving in and out all over the roads and the pavements. You begin to wonder how the few cars there are don’t have moped shaped dents in them. But on closer inspection, all the cars and taxis are fairly modern and well looked after with no dents. And all the mopeds, although sometimes older, don’t seem to beat up. What at first looks like an impending multi-vehicle pile-up, is actually organised chaos, with pedestrians, cars and thousands of motorbikes and bicycles moving in turn. All being mindful of each other while also trying to get where they need to be.

Riding on the back of Tam’s bike I felt safe and secure, she was a confident rider and knew her way around the streets of Saigon. It was an amazing feeling to zoom down the highway among local Vietnamese commuters as the sun set for the evening.

Our first stop was District 5 – China Town. We met Sang, our tour guide and the other guests on the tour for an introduction before exploring. We walked through fascinating markets selling live chickens and all sorts of meat and veg, laid out on tarpaulins on the floor, with people riding mopeds through the middle of it all. The surrounding streets were lined with shops selling decorative lanterns, wedding decorations and flowers. We stopped at a street food stall to watch them make broken rice and pork, a local delicacy. A top tip from Sang was to buy your street food from a stall joined to a restaurant because they are often more hygienic.

Next stop District 8 for dinner at a huge outdoor restaurant. Here locals choose their meat from the counter and BBQ together at the tables. We sat down in the low relaxed seating to enjoy some of the local food and a glass of refreshing sugar cane juice.

On to District 7 which is the new district where expats and well-off Vietnamese live. It is a world away from the hectic streets of District One, very quiet, with modern buildings, no overhead power lines, and very few bikes.

Our last stop was District 4, Sang told us this is where you can find the best seafood in Saigon. We stopped for some dessert at a street cart. The atmosphere was great with lots of people sitting around eating and drinking beer.

The XO bike tour was fantastic, with friendly, funny, and knowledgeable English speaking guides and drivers. Ideal for solo travellers or groups of friends wanting to see more of Saigon from a locals point of view. Surrounded by local people going about their evening, it felt like you were out for dinner with friends rather than on a tour.

To find out more about XO Tours visit their website: https://xotours.vn/

Read the January 2017 edition of my monthly column Tourist in my Town featured in Blank GC magazine. This month I explored some of the best campsites on the Gold Coast….

Read the December 2016 edition of my monthly column Tourist in my Town featured in Blank GC magazine. This month I went for dinner and a show at the Gold Coast’s Outback Spectacular. 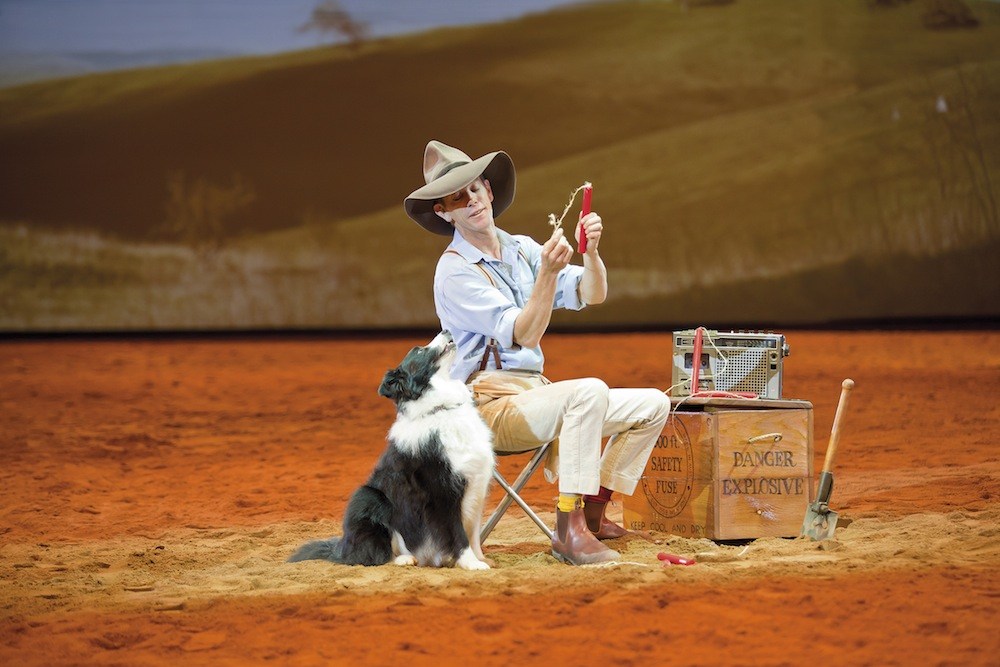 Whether walking on a Saturday morning is your weekly fitness ritual or your hangover cure, now that summer is here it’s time to get out and about on the Gold Coast!

To help you in your quest, we’ve rounded up seven of our favourite pretty walks from leisurely strolls to sweaty hikes.

Companies such as Scenic, Avalon, and Viking have teamed up with travel insurance companies to create specialist cruise insurance which will now be sold as part of your holiday.

From 2017 any cruise booked with Scenic will include a River Cruise Guarantee which will cover you for any delays, diversions, or cancellations whilst cruising. Read More…

Read the November 2016 edition of my monthly column Tourist in my Town featured in Blank GC magazine. This month I escaped the Gold Coast for a luxury vacay in Brisbane….

The Cruisers Sporting Guide to 2017

If you love your Aussie spectator sports you will agree that just a few days a year is not enough for most events. Why not turn your favorite annual sports fixtures into a weeklong affair, surrounded by like-minded sports lovers, reliving, discussing, and assessing the games and races over a poolside cocktail? Combine your love of sport and the open seas with P&O’s range of sports cruise packages. Whether your passion is watching the tennis, dressing to the nines for the horse racing, or holidaying while also appeasing your NRL obsessed hubby, these cruises are for you.

The beginners guide to choosing a cruise

It’s Plan A Cruise month and cruise newbies everywhere are knee-deep in cruise brochures trying to decide which cruise line to choose.

As well traveled cruisers know, the cruise line is important – but don’t be fooled into thinking all cruise ships of the same line are created equal.

Here are a few things to consider when choosing a ship. Read more….

Read the October 2016 edition of my monthly column Tourist in my Town featured in Blank GC magazine. This month I have been hunting down the best BBQ spots on the Gold Coast…. 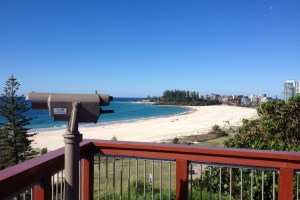 To see my previous Tourist in my Town posts click here.

Check out my feature on the latest accommodation innovations on cruise ships, part of Cruise Passenger’s Cruise Planner 2016-17.

Read the feature on page 22 of the Cruise Planner.

To see more of my travel features on cruising, click here.

Check out my feature on the latest incredible and innovative activities on cruise ships, part of Cruise Passenger’s Cruise Planner 2016-17.

Read the feature on page 20-21 of the Cruise Planner. 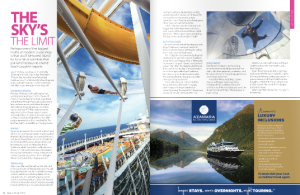 There is nothing better than sailing past standstill traffic on your bike, feeling very smug from the cycle path, taking in a bit of sun and fresh air, while the angry car dwellers stare at the long line of vehicles in front. This summer holiday why not leave the car at home and see a bit more of the world than the bumper of the next car!

Over 10,000 athletes from 204 countries took part in the 2012 Olympic games in London, which will go down in history as the first games to feature female athletes in all sports and from every competing country. Great Britain finished third overall with Silver medal in the woman’s road race from Lizzie Armistead, and two medals from the men’s time trial. With the next Olympics in Rio already upon us, its time to get on the road and explore the road race route of London 2012!

Day 1: Redhill to Kingston (16 miles) Arrive at Gatwick – take a 15-minute train to Redhill and pick up your bike from C and N Cycles (www.candncycles.co.uk – advanced reservation recommended). Kingston is a historic market town with fantastic riverside bars and restaurants, make sure to arrive in time for dinner at Stein’s (www.stein-s.com) and enjoy some Bavarian goodies in their riverside Biergarten to give you energy for your next leg!

Day 2: Kingston to Richmond (4.5 miles) Today’s short ride will take you through the magnificent Richmond Park with the long wild grass and roaming deer. Why not pack a picnic and enjoy views out over London from the top of the hill.

Day 3: Richmond to Hampton Court (23 miles). Get an early start today and arrive on The Mall in time to watch the changing of the guards at Buckingham Palace. Take a leisurely ride back through Richmond Park to Hampton Court, another stunning riverside location.

Day 4: Hampton Court Palace and Gardens. Enjoy a day off the road and explore Henry VIII’s beloved palace, built as we now know it in 1540, it is packed full of fascinating history. If you are visiting during the festive season make sure to book in for a ghostly carol singing tour of the Palace at night and go ice-skating in the grounds. If you are here in summer check out the open-air cinema, or the famous Flower Show.

Day 5: Hampton Court to Guildford (21 miles) Todays journey takes you through the pretty riverside town of Weybridge on your way to Guildford. Guildford has a lovely cobblestone town centre with plenty of shops and bars to choose from. Head to the Weyside, a traditional English riverside pub and stock up on energy for tomorrows ride.

Day 6: Guildford to Box Hill (15 miles) Almost on the home straight, todays ride is much shorter. Take a leisurely lunch in at the White Horse in Shere, a charming English Pub set in a 15th century farm house, and location of Hollywood film ‘The Holiday’. With a full stomach its time to head to Box Hill. Legs at the ready, this is a steep one!

Day 7: Box Hill to Redhill (10 miles) Congratulations you have now completed the London 2012 Olympic cycle route! Jump on the train back to the airport and rest those weary legs.