Sarah Loughlin ventures to Taghazout to check out the world famous waves and the developing surf culture in the small Moroccan town.

There is nothing in life both as thrilling and frustrating as surfing. After spending the winter battling through the frosty waves in the Channel Islands, trying to get the hang of this new hobby of mine, I thought I would take my own advice on learning a watersport and add a bit of sunshine to the mix!

Taghazout, a small fishing village turned surfers paradise, is about an hours drive from Agadir Airport. Having never been to this part of Africa before I had no real idea what to expect. The village itself is bustling with people, cars and mopeds and the small square is surrounded by restaurants, and surf shops. The coast is not as picturesque as other places I have visited, but it has a great atmosphere; local families, tourists and surf schools all mingle together on the long sandy beaches. The snack-sellers on the beach are a bit intimidating at first, as they can be a bit pushy, but are actually very friendly and provide much entertainment with their haggling and joke telling. The macaroons and candied nuts they sell are perfect for a post-surf snack!

As those who have been following my previous surf posts will know, I am not a great surfer, I am not even a good surfer. So I had arranged lessons via Surf Maroc; a surf school started by Ollie and Ben, two English surfers, back in 2003. Our surf class was an interesting mix of nationalities and people from different professions and backgrounds. Chatting on the beach at lunchtime was almost as educational as the surf lessons as I learned about the best bars to visit in Krackow, and how the Swiss school system works.

Being largely self-taught I have no concept of ‘surf chat’, and so for the entire first day I assumed wave ratings must be the same as ski slope ratings; green wave must mean beginner wave. I was mightily confused pushing myself into tiny white foamy waves as my teacher yelled from the beach at me to catch a green wave. On day two it clicked, green wave doesn’t mean beginner wave at all, it’s super cool surfer lingo for a wave that has not yet broken. You have to have good timing to catch these as opposed to white waves (the foamy ones), thus they are the mecca of intermediate surf waves.

Part of my problem, like most of the beginners I meet, is that waves are terrifying. Going head on with a huge unbroken wave while attached to an eight foot cumbersome floaty board was seeming more ridiculous the more I thought about it. But I had got this far, board in hand, I was determined to make it out to find one of these sought-after green waves. Alas it was not to be, and I went back to the beach in search of some candied nuts.

Back out in the surf again and I was constantly amazed at how patient and enthusiastic our teacher was with us, despite our consistent face plants into the beach. When my arms had run out of juice he even let me hold on to his ankles so he could paddle me outback to meet the rest of the group – now that is service! Surf Maroc employ a lot of local staff from Taghazout and surrounding villages; this helps improve the local economy and quality of life by providing jobs as well as offering training and opportunities for young entrepreneurs, who sometimes go on to open their own surf businesses. The teachers at Surf Maroc, who have all grown up surfing in the area, have great local knowledge which is huge benefit to the customers. They always managed to hunt down the waves, despite the forecast being not so great, and made sure we were in our wetsuits and out surfing before the beach got too busy.

One interesting thing about holidaying here is that Taghazout is a dry town, as a European this is a bizarre concept. But actually it was quite nice, I drank more Fanta than dentists would recommend, 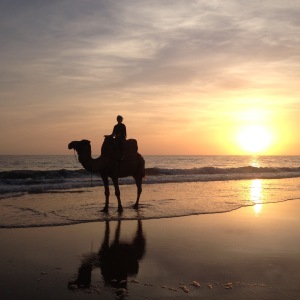 but it is the perfect place if you are planning an alcohol detox! You can buy alcohol in some near by hotels such as the Paradis Plage who have a great beach bar as well as beach side yoga sessions. Outside Paradis Plage the locals bring their horses and camels and you can ride down the long peaceful beach. The surfing in Morocco was great, but it was nothing compared to riding a Camel on the beach at sunset, I felt like a Princess riding through the desert on my trusty steed (one can dream).

If you like a post surf yoga session, Surf Maroc offer classes on their yoga balcony set into the cliffs at the Taghazout Villa. It was quite honestly the most relaxing place I have ever been. As the sun set over the sea, the sound of the waves crashing rhythmically into the cliff was the perfect accompaniment to the session. There is weekly schedule of post-surf evening entertainment at Surf Maroc , the BBQ on the balcony of the Auberge was a nice way to socialise with your surf group out of your wetsuit!

If your weary arms need a break from all that paddling why not head to Paradise valley; only a 45-minute drive from Taghazout. As you drive in to the valley there are cafes and restaurants dotted around next to the river with the tables and chairs in the shallow streams so you can keep your feet cool while you have a nice Fanta. A short hike from the car park at the top brings you through the trees into the valley, where you will find locals having big family days out, preparing and cooking their tagines on the rocks. There are also make shift shacks selling fresh tagines and cold drinks. You won’t be offered a menu, you just ask what they have (normally two different types of tagine!), they are very good value and the food is great.

Renting a car is very reasonable from Agadir airport, petrol is cheap and it’s not to difficult to navigate your way around. Make sure to keep some change handy for the car guards who will watch your car while parked in town or at the beach. If you don’t fancy driving, airport transfers are included in Surf Maroc’s packages and they offer excursions to Paradise Valley. The packages include everything but the flight which you will have to book yourself. If you are booking in advance try Easyjet for direct flights from the UK, or Thomson Flights can be really good for a last minute flight deal. The peak season for Surfing in Taghazout is November – April, so get booking for your mid-winter sunshine now for the best flight deals.

← Crêpes, Châteaux – and a Campervan to Call Home
Tandem Adventures →